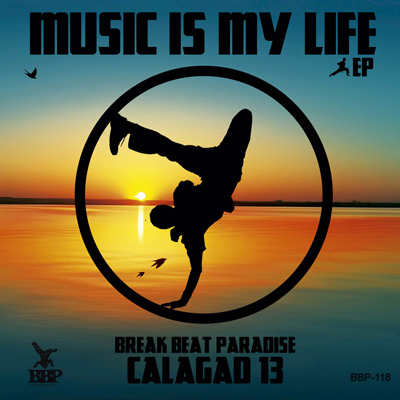 120 bpm plus and makes you want to leap around like a hare on hot coals? Gotta be b-boy breaks. Welcome to a world where if it doesn’t give you that itch, it ain’t worth scratching. There are no such shortcomings for The Fonkey Calling though – the amping opener to Calagad 13‘s triumphal return to BBP (their Music Is My Life EP) which carries enough firepower to see offany battle rivals. B-boy breaks don’t have to be over 120 bpms of course and actually the rest of the EP isn’t – but that ain’t mean it don’t rock the spot.  Think Positive is a JB cut-up dance jam, The Great Battle pits warlike guitars and epic horns against a rolling breakbeat, Electric Boggie (surely ‘boogie’) Nation comes on like something off the soundtrack to Shogun Assassin, Flow makes like the breaks are a jazz thing and as a Brucie bonus you also get old classic (also the title track) in its human beatbox incarnation. Well I say that’s the Brucie bonus – you also get four of the cuts in instro form too, and if that’s not a Brucie bonus – I don’t know what is!”
http://monkeyboxing.com/content/calagad-13-music-is-my-life-2016/