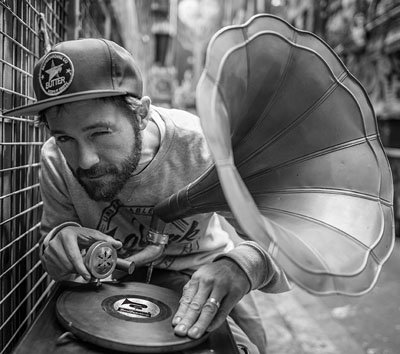 Tom Showtime is a man of many guises. DJ. Producer. Remixer. Saxophonist. Gramophone Enthusiast. From Be-Bop to Breakbeat and everything in between…

Tom Showtime is a man of many guises. DJ. Producer. Remixer. Saxophonist. Gramophone Enthusiast. From Be-Bop to Breakbeat and everything in between, Tom’s passion for music is paralleled only by his legendary (some would say mythical) enjoyment of watermelon, coffee and cricket. That’s just how he rolls…

With a style more eclectic than the selection of records at your local thrift shop, he has often been likened to the genre-bending Mr Scruff, an artist whose records Tom has coveted from the beginning. Through his early days playing in jazz bands, to digging for records across the globe and spinning tunes from London to Melbourne, his sound in the studio is as diverse as the music that inspires it.

Beats are Tom’s passion, as a genre and as the driving force behind his music. Influenced by the likes of Bonobo, Quantic & Nightmares On Wax, the result can be heard on the head-nodding trip hop odyssey ‘The Showtime EP’ in 2008, ‘EP3013’ in 2011 and his acclaimed debut LP ‘The Jam Thief’ in 2012. With his sofa rocking sounds perfected, it was now time for his productions to conquer the clubs.

Releasing a bootleg series called ‘Your World Against Mine’ and three volumes of ‘Mashiona Tasty Mash-Ups’ saw Tom attract attention from both local and international booking agents and record labels, leading to official remixes for artists like The Pharcyde and The Ragga Twins, a massive east coast trip headlining the legendary Regrooved parties, a national tour with N’Fa Jones (1200 Techniques) and multiple highly regarded DJ residencies.

While all this was happening, Tom also returned to his roots forming The Showtime Trio with Zvi ‘Zedsix’ Belling on bass, Conrad ‘Defcon’ Tracey on drums, and regular guest MCs such as N’fa Jones, Lotek and D’Fro for live performances. Playing Hip Hop classics on a jazzy tip and Jazz classics with Hip Hop flavours along with Tom’s own original compositions, a new style coined “Boom Bap Jazz” was born, exciting every crowd that witnesses it.

Add to all this a #1 release on Juno Download Best Selling Chart for his collaboration EP with DJ Maars, European and North American tours in the pipeline, a forthcoming 12” vinyl only release, the final touches being put on a new LIVE AV show for international audiences and his own residency/brand ‘Easy Now’ gaining huge popularity, Tom’s show is definitely on the road… “Roll up, roll up, roll up, it’s Showtime!”