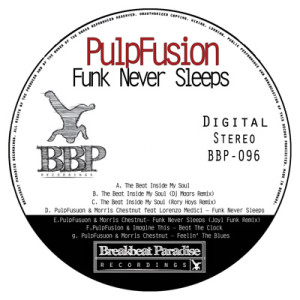 Breakbeat Paradise Recordings is pleased to finally welcome to the label a true veteran in the funky breaks scene: Mr PulpFusion with the huge 12” vinyl release Funk Never Sleeps – now available on digital. Straight out of Switzerland, PulpFusion has been producing funky jams since the early days of nu funk, and this time around he has brought a true dream team of remixers for this enormous 7-track EP. On the flip side he has teamed up with another skilled funk producer Morris Chestnuts from Bristol as well as Producer and Rapper Imagine This from New Zealand to help complete this funk fest of a release.

PulpFusion has countless albums and EPs under his belt and done remixes for Ed Royal and Mr Bird & Tal M Klein as well as running the successful label Big Balls Records. He has a unique sound that has strong roots in electric psychedelic funk mixed with beats and breaks.

The remix duties are in good hand with all experts within their fields starting with DJ Maars from down under, who is true master in skanky reggae mash-ups –  Mr. Rory Hoy who is skillfully keeping alive the sounds of the big beat era and finally a true BBP all-star Jayl Funk who specializes in anything funky for the dancefloor.

Breakbeat Paradise Recordings is proud to start off another year with another extremely funky release to keep pushin’ the sounds of funky beats and breaks even further.

A. PulpFusion kicks off the EP with his straight up funky original of The Beat Inside My Soul. Some easy going breakbeats and some groovy basslines is all it takes for PulpFusion to create a in instant nu funk classic. All brought to the next level with a beautiful hook on the female vocals on this track.

B. If you didn’t know DJ Maars you would be surprised about this guy being able to create a skanky reggae jam out of just about any tune. His remix of The Beat Inside My Soul is a perfect example of him doing just that, by taking the essence of the vocals of the original transferring it all the way to Jamaica for some reggae grooves. All perfectly mashed up with some hip hop rhymes to go with it.

C. To end off the A side we got Rory Hoy giving The Beat Inside My Soul his signature big beat treatment. Toughening up the arrangement and adding some booming bass lines, allows Rory Hoy to turn the sweet vocals of the original into a true big beat anthem.

D. The Funk surely does not sleep as it continues on a get even funkier on the flip side. Funk Never Sleeps sees raw funk flavors from the magic team PulpFusion & Morris Chestnut & the legendary sax player Lorenzo Medici as they cook up a funky joint that will get just about any party started.

E. Everybody’s favorite nu funk producers Jayl Funk is on the spot to turn Funk Never Sleeps into his own as he slams on some latin style funky beats and rearrange the element of the original to perfection. Funk headz can go straight for this one.

F. The funk fest goes on – on the third cut on the b side, which sees PulpFusion teaming up with producer and vocalist Imagine This on their Beat The Clock. The electrified backing track of this jam matches perfectly with the progressive vocals by Imagine This.

G. Finally last but certainly not least we got PulpFusion and Morris Chestnut back together for the final jam on the record: Feelin’ The Blues. The funk is mashed up sweetly with the classic Johnny Cash country song as if they would have always belonged together. At the end of this jam you will all agree with us that FUNK NEVER SLEEPS