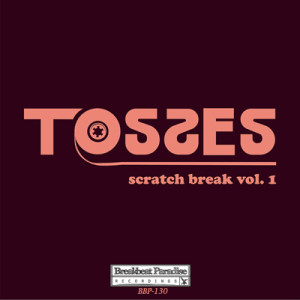 Breakbeat Paradise Recordings is back and once again teaming up with Italian funky beats enthusiast Tosses, who has prepared a 4-tracker of ghetto funk bangers.

This time around is all about the peak-time weapons and turntable elements that run thourgh-out this EP, which is what Tosses refers to as Scratch Breaks!

This EP follows up on his successful Papa Got a Brand New EP that just dropped on Electric Cave as well as his 2014 Stone EP that was release here on Breakbeat Paradise Recordings. Also still fresh is his vinyl release called Joy featuring Rayna.

Scratch Break Vol. 1 dives into various areas of the funk music legacy – from straight 70s funk, to blues and even Swing. So something for everybody can be found on this release.

As always BBP is keeping you fueled with them funky beats…

“When it comes to coming up trumps in the party-breaks scene Italy’s Tosses wins the er, toss, every time. Here though he takes a little bit of break from the norm, presenting four less recognisable jams rather than the instant -hits he usually provides. “Adderall” may be generally used to treat hyperactivity, but here it’s an utterly electro-boogie wild child. Elsewhere “Funky Fresh” riffs off classic 70s funk grooves, “To The River’ is a bluesy, gospel-breaks reverie, and “Work Song” closes with some baddass vintage swing-samples.”