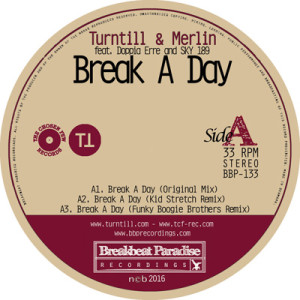 Breakbeat Paradise Recordings has teamed up with The Chosen Few Records to proudly presents the latest escapade of TURNTILL & MERLIN: “BREAK A DAY“. This tune is dedicated to all the b-boys and other funkateers worldwide that love the drumsound and the funk. The MCs on the song are DOPPIA ERRE from Apulia, Italy and SKY 189 from Capetown, South Africa.

Both are true Hip Hop heads that love the art of breaking! In the hook you hear the sweet, catchy voices of Stella Baraldo and Dominique Bouvier. A real powerful b-boy anthem and club joint alike, which is interpreted in five additional versions on a six track 12” vinyl release.

Guests on the A-Side are DJ KID STRETCH (Greece), FUNKY BOOGIE BROTHERS (Belarus) who is giving the tune a new flow in the oldskool b-boy direction. On the flip side we have invited some of the very best from the Ghetto-Funk scene to give the tunes an injection of electro vibes and big basslines. For this job we called upon the dream team DUBRA X ARTEO (Latvia) and ghetto funk superstar B-SIDE (United Kingdom) who are always armed to the teeth with big beats and electro basslines. Last but not least we sent for a true veteran and pioneer in the Nu Funk scene QUINCY JOINTZ (Germany) to do his thing on the electro side of this vinyl release.

The funky beats and breaks has once again brought people together from all over the world to collaborate on this big release that not only tips the hat to the b-boy community but also pushes the limit to the new eras of funk music. Something we share the vision for and feel strongly about on both Breakbeat Paradise Recordings and at The Chosen Few Records.

„The mighty Turntill has done it again, this time with a party track that reaches back to the disco roots and a hook that is sure to become the next anthem for b-boys, b-girls, and funk lovers. Can’t wait to watch the people get down to this one!“

„Truly international alliance dropping bombs! The remixes are killin’ it!“

„Big funk break and ghetto tune with a lot of sunshiny and urban lyrics…also a bit 80/90 ́s flavour as well will meet a lot of generation ́s on the dancefloor! addiotional remixes from funky boogie brothers for all b girls and b boys in every age!“

„I Love the original Version and Kid Stretch Remix. The Original Version is an awesome Breakbeat burner for the Floor. Dope Beatz, great Vocals and nice B-Boy Vibe on it. Full Support!“