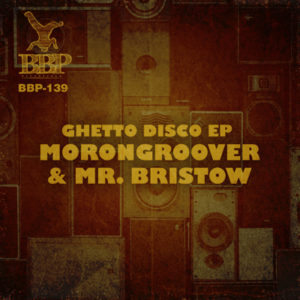 Breakbeat Paradise Recordings is back at your service, for all the funky disco lovers out there. Two BBP all-stars: Morongroover and Mr Bristow have joined forces on this project, which they have chosen to call: Ghetto Disco.
Basically it encapsulates 70s disco funk influences with a healthy dose of Moog bass, and merges it with classic MC hooks and scratches. This compilation gives you the style of music Morongroover & Mr Bristow have been pushing for the last six months and matches perfectly with the recent disco vibes that have been going on at the BBP camp.

Monkeyboxing.com Review: “Gents – time to get your three-piece flared-leg suits on; ladies time to hit the wardrobe for a jersey wrap because Morongroover and Mr Bristow are shortly to go large with their Ghetto Disco EP on Breakbeat Paradise! The pair set out with the intention of funking you up till you boogie down and with opener I Like It Like That it’s Soul Train Disco Night manoeuvres from the off. Then, having got you making like a fly gangster glitterball boss, the pace picks up for Front To The Back‘s outright pumping nu-disco menace complete with scratch flourishes – a vibe that also defines pneumatic closer Where You At. This release though is all about The Wizard Of Oz which will have them trippin’ at the disco. Why? Because it blends People Under The Stairs’ The Wiz with the sound of Studio 54 in a manner not completely alien to P.U.T.S. themselves. And I can’t imagine anyone grumbling about that.”
(Out 25 August on Juno/ 31 August globally on Breakbeat Paradise)