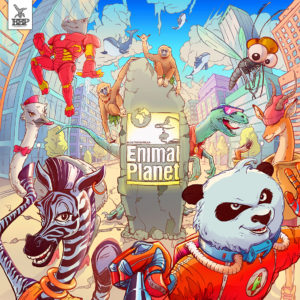 Breakbeat Paradise Recordings is very pleased to welcome back the ElectroGorilla with his second solo release on the label. This time around he’s cooked up a full-length album of various block rocking beats with a good doze of electro funk elements.

Since ElectroGorilla’s debute EP on BBP in 2015 he has been all around the funky breaks scene under various aliases. From TruFunk to Bomb Strikes under the The Funk Fury and featuring on various compilations and releases on Future Funk under the name Synoptix.

Now he’s back in the Gorilla outfit and boy did he bring along the funk this time! Each track is showing a new and more melodic side and a depth in the productions that are rarely seen in the assembly line electronic music scene these days. Demonstrated to perfection on the melodies and catching wobble basslines on Mosquito Lullaby and the progressive funky grooves on the Anteloop featuring Bob. The mellow sides of the spectrum are also being experimented with on tracks like Zebra Tribe and the beautiful Killer Whale Odyssey.