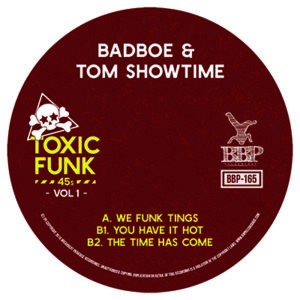 Breakbeat Paradise Recordings is on a neverending jouney of providing DJs and music lover around the world with the raw funky sounds of the golden era of funky party breaks. With a number of 12” vinyls and digital releases focusing on the oldskool breaks and funk it seemed like a natural thing to put some of these joint out on the 7-inch format.

To launch the Toxic Funk series we called upon some real heavy hitters and subject matter experts on the party rocking funk material. BadboE & Tom Showtime has teamed up to delivery 3 timeless cuts of no-nonsense funky boom bap bangers.

Kicking things off with the epic We Funk Tings running low and slow at 95 BPM but maintains a funky vibe accompanied by some slick funky rhymes.

On the flipside BadboE and Showtime brings on the latin flavors on the We Have It Hot jam that maintains the street attitude with an infectious latin groove and on point funky rapping.

Last but not least the catchy vibes are given a timeless funky boom bap beat to bring this 7” home as an instant party starter for the funky DJs across the globe.

Get your hands on this funky plastic – cuz it won’t last long! Its Toxic!