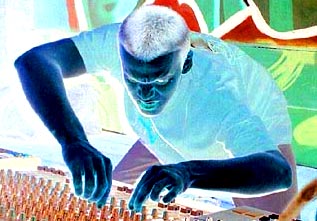 B.B Borne’s music is all about: Breaking, celebrating and having a good time on the dancefloor !!
In 1987 i had my first musical contact with the world of breakbeats. There was an english Artist called “bomb the bass” who released the incredible track “beat dis”. This fusion of samples of all kinds, like the mouthorgan or the waking clay/tone mixed with a heavy beat and a funky basline was so amazing and fascinating, that this piece of music always still has an influence for the kind of breakbeat I’m producing in 2006.
From that point on I started Djing for more than 15 years, not just breakbeats also all other kinds of electronic music. In 1997 I bought my first groovemachine the Roland-MC303, Produced some techno and house, but I wasn’t really satisfied in what I could do with this small. Things changed in productivity when I bought my first sampler in 2000 (yamaha su-700).
The possibility of making whatever u want out of any kind of sound was the reason why the sampler is still my favourite instrument in producing funky breaks. From this time on I became a “samplemaniac”. After many experiments with different kinds of breaks I slowly developed my own style of funky breaks. As I am a dj for a very long time I learned that the people on the dancefloor like to be pushed forward, they want to be surprised and entertained by the music they hear. So this is what my music is all about:

Breaking, celebrating and having a good time on the dancefloor !!