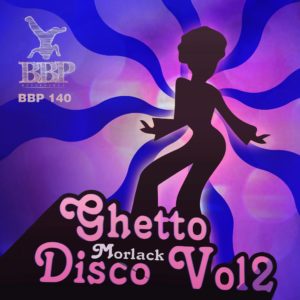 Just as you thought it couldn’t get more disco – Breakbeat Paradise Recordings is back at your service for a second installment of the Ghetto Disco series. This time with a true household name on BBP: Morlack who returns for his 10th solo release on the label!

Morlack is doing his thing across 5 super funky cuts of ghetto disco to follow up on Morongroover & Mr Bristows successful vol. 1 release which dropped a few month back. The basslines are big and the party vibes even bigger as Morlack digs out some rare disco grooves and makes them his own by applying his signature ghetto rocking arrangements.

The EP kicks off with the party disco rockin’ In Ur Face jam, which will be a sure party starter and perfect for the upcoming holidays parties. The party continues on the second cut called Smokin’ ‘n’ Drikin which slows it down a bit and makes room for a classic hip hop acapella to take center stage.

Things are gonna get big on the 3rd cut which take things way back to the oldskool on the Luv U Mama which has already seen support by Roast Beatz on the Official Ghetto Funk podcast. Party vibes for everyone continues as the Show Me How jam glides across the airways. Last but not least Morlack end things with a real smooth banger on the Come & Get It joint. Morlack has brought us yet another classic EP.