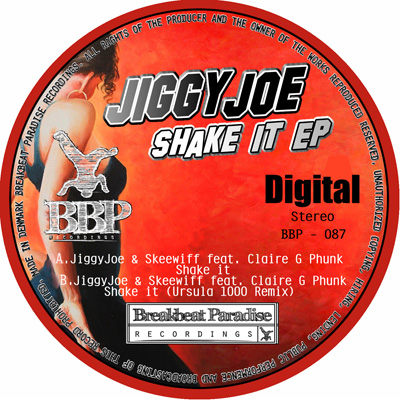 The title tune is produced with a true legend in the Funky Breaks scene: Skeewiff, who is known and loved for his breakbeat contributions – dating all the way back to the bigbeat era. Skeewiff has released a number of albums on Jalapeno Records as well as his own Pedigree Cuts and we are proud to now have him feature on BBP release. Another legend features on a remix for this EP – Ursula 1000 from New York is throwing down some bangin’ beats on his version of the Shake It track. Finally the B-side features countryman Jazz.K.lipa in the co-pilot chair on the Welcome track.

JiggyJoe has been a DJ for 13 years playing various styles of music and has played in various parts of the world including his homeland Germany, the UK, Spain, USA, Russia, Canada and many more. With guests on this EP including ‘Claire G Phunk & Rayna MC’ who were featured on BadboEs ‘Pump up the Funk’ album from 2012 and newcomer ‘Tatted up Toon’ this promises to be an EP worth waiting for.

Shake It EP is the very first JiggyJoe’s artist EP to come out on vinyl and it’s also the first glance of what to expect of JiggyJoe’s full length album called Get Jiggy!.

The digital version of the EP comes with a never released Rory Hoy remix of the title tune.