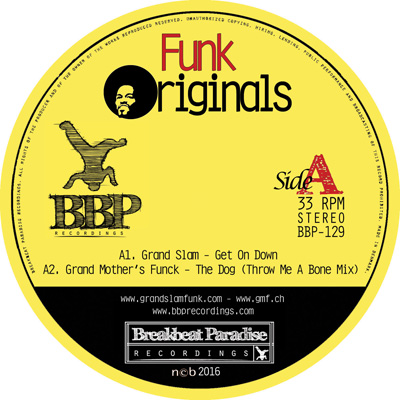 “Perennial party boosters, Breakbeat Paradise dive into spring with a fire quartet of modern funk. With bands repping across Europe, it’s a global groove affair as longstanding German funkateers buss up big boogie hooks on “Get On Down”, Swiss soulboys Grand Mothers Funck up the tempo with the sweaty floor-focussed groove of “The Dog” and Nasa Funk fly the p-funk flag so hard and proud they need a new pole. UK’s A Man About A Dog rips up the finale with a scratched-out Latin heater. Original.” /Juno Review

“Breakbeat Paradise is a label which has made a name for itself over the last decade and more by providing party breakbeat junkies with all manner of musical goodies, not a few of which have made cheeky usage of samples borrowed from the golden era of syncopated soul. Now the label is returning the favour to the funk with an EP of all-original 70s-style tracks” /Monkeyboxing.com – Read full review here!