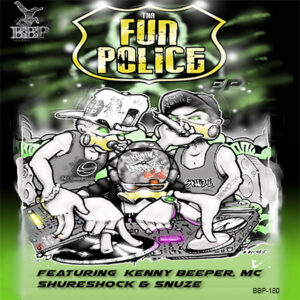 The Freefall project takes on the current pandemic situation and twists it into a steady rocking funky hip-hop phenomenon. Kenny Beeper is laying the ground-work with a super catchy low-slung funky groove and MC Shureshock does he thing by bringing the vibes and funky flow – while Snuze comes in with some rapid funky rhymes. The Freefall tune comes with 4 top-of-the-line remixes from some of Australia’s finest producers.

Kibosh gives the Freefall his signature glitchy bass treatment, while Pecoe bring his funky party breaks before Spenda C speeds up the breaks and hands it over to the awesome Doctor Werewolf who’s smashing us into Drum N Bass inferno.

The Fun Police also drops the title tune which showcases even more funky vibes and big flows from Shureshock and Snuze. Whatcha gonna do when Tha Fun Police is coming for you?