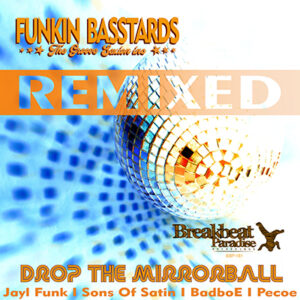 After releasing the second EP by the Funkin Basstards we though it would be appropriate to follow up with a remix EP of the 4 originals jams from the Drop The Mirrorball EP.

To do that in style we hooked up with some of the best producers in the scene to all put their personal twist on these catchy disco bangers.

Starting this off with the label head honcho BadboE who comes heavily armed with the nu skool breaks and some silky smooth disco grooves for the Feel The Vibe track. A classic BadboE treatment with multiple sections of grooves to bring out the very best of the sweet vocals by Sofia Kamina.

To follow this up we’ve turned to the true veteran from the funky breaks scene that can do no wrong when it comes to remixing. Jayl Funk is at it again with some well-arranged nu disco flavors to skillfully transform the lead track 2000 feat. Sofia Kamina into a smashing Jayl Funk anthem.

If you want the unspoiled breakbeat funk there is only one remixer to call for: Pecoe. He done a number on the originally mellow Drop The Mirrorball and turned it into a dancefloor breakbeat banger!

Last but not lease we wanted to turn up the heat a bit and invited the Sons of Satin to do some uptempo hardcore breaks remix of the Soul Disco jam.

That concludes another epic treatment of some classic original funky disco jams from the Breakbeat Paradise Recordings camp.