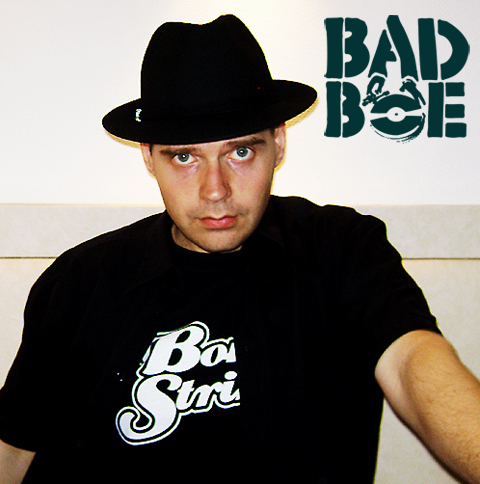 BadboE (Nu Funk, Ghetto Funk & Funky Breaks Producer/DJ)
BadboE from Denmark is one of the pioneers and key player in the international nu-funk/ghetto funk
scene. With 2 album releases and a dozen EP releases under his belt, he’s now ready to tour the world with
his b-boy funky breaks sound. He has released records on all major labels in the NuFunk scene:
Bombstrikes (UK), Good Groove (UK), Manmade (GER), Baffin Beat Brigade (USA) and many
more as well as remixing tracks for Layo & Bushwacka, Fort Knox Five, Basement Freaks,
Omegaman and many others.
He’s been DJing in many European cities in England, Germany, Greece, Poland, Hungary, Czech Republic,
Ukraine as well as San Francisco and New York. He’s played at the Roskilde Festival in Denmark as well as
the electronic Boom Festival in Portugal.
In 2006 BadboE formed his own recordlabel called Breakbeat Paradise Recordings (BBP Recordings),
which has currently released around 40 EPs on digital and 12 vinyls. The goal with the label was to ensure
faster access to the market as well as open doors for some of the great artists that are doing funky breaks.
Since then the nu funk scene has come to live and the BBP label is set to be one of the leaders in this genre.
BadboE has been keeping busy releasing his unique flavor of b-boy funk and uptempo partyfunk on his own
label and on various other labels. After releasing a few vinyl records in 2007 – the debut EP: “Loose Your
Funky Self” and a remix by Break The Box called “Walk out Laughing” the successful EP
“Dynamite/Nothing But the Funk” was released in Oct 2008 with remixes from All Good Funk Alliance!
This was followed by the successful 4-track Good Groove 11 vinyl that managed to stay at the no. 1 spot on the
breakbeat chart for several months. The first full length album “Break The Funk” came out in 2009
followed by remix album “Break The Funk Remixed” in 2010, which both made a big impact to in the Nu
Funk scene. A lot or remixes has been coming out on various labels and they have all contributed to settling
BadboE’s name in the funky breakbeat scene.
BadboE’s music is going in 2 directions – the first is making funky breaks and trippy lounge breaks without
using uncleared samples (material to release commercially) and the other is for the scene mixing, breaking
and bootlegin’ with the oldskool funk tunes. In the upcoming years BadboE will focus on getting his music
out there with a second full length album coming out in 2012 as well as touring the world with his funky
partyrocking DJsets. Stay tuned…