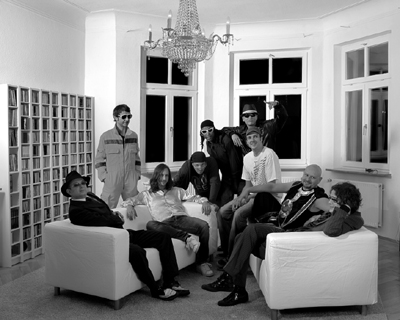 GRAND SLAM has mastered the art of combining ingeniuosly Funk, Soul and HipHop during their 23plus-year long career

With their very own musical mix , the 9 funkateers are a guaranteed dancefloor-filler since 1985. The roots of Funk and Soul, paired with elements of HipHop and Rock, melt to a never-ending, hypnotic groove. The international line-up, featuring musicians from Germany, Switzerland and the U.S.A, presents its brandnew album “Opossums & Racoons” live in 2008 (released dec 22, 2007 on Peppertone Records). Just recently GRAND SLAM has won the 25th German Rock & Pop Award and are proud holders of the title “Germany’s Best Funk/Soul Band 2007”.

Old-school P-Funk is still the musical foundation, but on the current album “Opossums & Racoons” (www.HHV.de) GRAND SLAM is entering Hip-Hop – the urban sound of today. Influences from Rock, Jazz and Soul are merged to a homogeneous whole and build the unmistakable style of GRAND SLAM.

2 ½ hour-long non-stop-groove parties are no rarety when the nine funkateers enter the stage. It’s time to party !