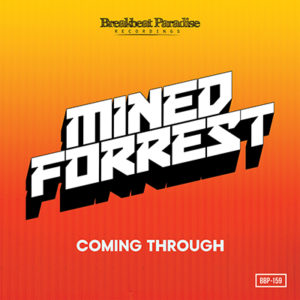 With now their second full release though Breakbeat Paradise Recordings, Mined & Forresthave delivered an awesome array of breaks and beat, as well as bringing in remixes from Funkanizer and Blockboy.

The second track brings in some heaviness. ’Rock on’ gets the big boy treatment, with punchy beats and synths followed by a big wobble bass to bring it all together.

For the third track, Mined & Forrest join forces with LAWN, Stephanie Lottermoserand Eve Lamell,for a smoooooth, atmospheric, bass heavy lounger called ‘I Would Fall’. The hypnotic vocals take you on a journey of delight, progressing through sumptuous sounds, and a sax to die for, with it all culminating in a musical voyage of live and electronic instruments.

Now… Funkanizer… This guy has brought the funk with his fantastic remix of ’Funk Toxic’. Snappy snares, a deep rolling bassline, as some switch-ups all come together to get those feet moving.

The final track on the already funkin’ release, sees Blockboy put his touch to the sweet ‘I Would Fall’, and you can definitely here his hip-hop roots. Starting nicely, with a downtempo feel, this track finishes with big wobble bass, taking you by surprise, and wanting more.